IAHV aims to train 1,000 inmates in a year.
Hundreds of Dubai prisoners learn meditation and yoga to heal trauma

Dubai: Hundreds of prison inmates in Dubai have found fresh optimism to turn their life around with yoga, helping them breathe in positivity and breathe out the trauma.

Aided by a unique programme, the Prison Stress Management and Rehabilitation Training (Prison Smart), an initiative of the International Association for Human Values (IAHV) and supported by Dubai government’s Community Development Authority (CDA), many prisoners in Dubai have had life-changing experiences.

Applying healing methods such as yoga, pranayama and other breathing techniques to help prisoners improve their mental and physical health, the programmes aim to help people caught up in the criminal justice system.

Over the next year, IAHV aims to train at least 1,000 inmates in Dubai in new skills, imparted by Prison Smart. Globally, more than 700,000 prison inmates in 60 countries have benefited from the programme, helping end the repeated cycle of violence, abuse and return to prison.

The programme has been a success with prisoners in Dubai who now sleep better, think more clearly and are beginning to take responsibility for their actions, say social workers involved in the programme.

Course participants have reported a decrease in depression, anxiety and interpersonal conflict; clarity in thinking; increased alertness and resilience to daily life stresses and improved immunity and physical well-being.

Sausan Mahmood, specialist social worker at CDA, said the authority has received great feedback from prisoners who have attended the Prison Smart programme.

There is a significant change in inmate attitudes, especially those with longer sentences such as life imprisonment. There is a perceptible decrease in instances of violence and fighting, and they have become more organised and responsible. With people from so many different nationalities, cultures and backgrounds under the same roof, yoga and other breathing exercises help them to get along, maintain a sense of harmony and be nicer to one another, said – Mahmood.

Inside every culprit, there is a victim crying for help. That person is also a victim of ignorance, small-mindedness and lack of awareness. It’s stress, lack of a broad vision on life, lack of understanding, and bad communication that leads to violence in society, said Sri Sri Ravi Shankar, IAHV’s founder.

Sri Sri on countering violence: We need to help people move beyond their prejudices

The Brazilian Government conferred Sri Sri Ravi Shankar with the title of ‘Friend of Military Police of Brazil’, as more than 1,000 military officials have benefited by Art of Living’s meditation workshops.

Marking Mahatma Gandhi’s 149th birth anniversary, global humanitarian and peacemaker, Gurudev Sri Sri Ravi Shankar, founder of The Art of Living, emphasised the need for people to recognise the universal values that connect everyone in spite of the religious and cultural diversity in the country while speaking at world summit on countering violence.

The Brazilian Government today conferred Gurudev with the title of ‘Friend of Military Police of Brazil’, as more than 1,000 military officials have benefited by Art of Living’s meditation workshops.

“Violence free society, inhibition free intellect, trauma free memory, sorrow free soul is the birthright of every individual,” said Gurudev Sri Sri Ravi Shankar. He is said to have convinced the FARC about the strategic importance of following Gandhi’s principles of non violence, that played a crucial catalyst in ending the 53-year old civil conflict between FARC, one of the largest left-wing guerilla movement, and the Colombian government. 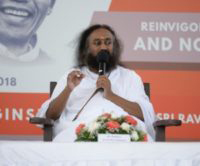 While addressing over 30 members from the US National Police Foundation along with global thinkers, policy-makers, law enforcement officials, activists, lawmakers and scholars who came together to deconstruct modern day conflicts and approaches to solving them through Gandhian principles of non-violence, Gurudev said:

We need to help people see beyond their prejudice. We all talk different languages and our cultures are different and so are our ways of worship. Spirituality is recognizing universal values and diversity that exists in our creation.”

Putting India on the global map as the hub of peace tourism, the conference saw the delegation travel from the US to India and immerse themselves in local Indian culture and participate in workshops to understand the wisdom behind ‘Ahimsa.’

“In my 35 years of careers as a police officer, I have seen terrorism, separatism of all shades,” said Padmashri Prakash Singh, former DIG, UP Police, “I believe from experience that corruption is common thread that runs through most of the problem which leads to bad governance leading to discrimination, exploitation, unequal growth which is a cause for frustration, anger and unrest.”

“As Gurudev had mentioned in one of his speech that solution for this is education which is multilingual, multiracial, mulitctural, multireligious so that once you know about other people, other denomination and thoughts you develop respect for them, and resulting in proportion of conflict will go down,” he added.

The conference began with emphasizing the power of inner peace in creating sustainable peace in the world around us. The need for peace activism was also emphasized. Experts shared their unique perspectives to the complexities and nuances of creating a world of non-violence. They discussed the causes of strife ranging from religious dogma to repression, shared personal stories of how witnessing violence led to a resolve to make a difference and explored how conflict goes beyond what’s visible and obvious.

Delegation dove deep in the solutions part of the conference- interfaith dialogue, protecting women and children, strategies for gang interventions, preventing recidivism in correction centres among others were discussed.

Violence free society, inhibition free intellect, trauma free memory and sorrow free soul are the birthrights of every human, said Sri Sri Ravi Shankar on Tuesday. The spiritual leader and founder of the Art of Living said that people should see beyond their prejudice to end violence.

While speaking at the ‘World Summit on Countering Violence’ he expressed concern about today’s youth turning aggressive at little matters. “Losing their temper has become a fashion among the youngsters recently. This is due to the influence of films and media. If they don’t have the strength to tackle a problem, they turn aggressive and that finally leads to depression,” he said.

Over 30 delegates from across the world participated in the summit organized at Art of Living International Center in Bengaluru. The conference began with emphasizing the power of inner peace that helps sustain non-violence in the world. Experts shared their perspectives on the complexities and nuances of creating a non-violent world. They discussed issues from religious dogma to repression causing strife and shared personal stories of how witnessing violence led to a resolve to make a difference.

“In my 35 years as a police officer, I have seen terrorism and separatism of all shades. Corruption is the common thread that runs through most of the problems leading to bad governance. This in turn leads to discrimination and exploitation causing frustration and anger,” said Prakash Singh, former DIG, Uttar Pradesh police.