After suffering in ‘own private hell,’ vet gets relief from unlikely source

Vietnam veteran Fred Moffatt, who is part of the honor guard at Wilmington Veterans of Foreign Wars
Post 5422, suffers from post-traumatic stress disorder. He uses yogic breathing techniques he learned through the
nonprofit group Welcome Home Troops. The program has helped him deal with symptoms like flashbacks, nightmares, panic and anxiety. (Zbigniew Bzdak/Chicago Tribune).

Standing shoulder to shoulder with six of his fellow veterans, Fred Moffatt was honoring the dead at a military funeral, just as he’d done a hundred times before.

But that day last spring at the Abraham Lincoln National Cemetery in Elwood, something was different. The air was hot and wet: jungle air. The rain hitting Moffatt’s raincoat made exactly the sound the rain used to make when it fell on his metal combat helmet in Vietnam. Ordinary leaves took on vivid tropical hues, and distant trees lined up in the neat rows of Southeast Asian rubber plantations.

Moffatt’s face turned ghost-white, and his body shook as time and space contracted, catapulting him back to 1967. It was all he could do not to shout out a warning when the wind sent a ripple through a bank of tall grasses: “Movement to the front!”

That kind of acute flashback could once have hounded Moffatt for hours, but the 71-year-old former Army medic from Joliet is one of a growing number of combat veterans with post-traumatic stress disorder (PTSD) who are getting relief from an unlikely source: a yoga-based breathing and meditation workshop offered by Project Welcome Home Troops, an initiative at the nonprofit International Association for Human Values.

(Vietnam veteran Fred Moffatt, who is part of the honor guard at Wilmington Veterans of
Foreign Wars Post 5422, suffers from post-traumatic stress disorder. He uses yogic breathing techniques he learned through the nonprofit group
Welcome Home Troops. The program has helped him deal with symptoms like flashbacks, nightmares, panic and anxiety. (Zbigniew Bzdak/Chicago Tribune).

Almost 2,000 people, most of them veterans and active-duty service members suffering from the flashbacks, nightmares and anxiety of PTSD, have taken the workshop, according to Project Welcome Home Troops national director Leslye Moore.

Buoyed by a favorable 2014 pilot study at the University of Wisconsin at Madison and a positive portrayal in the 2016 documentary “Almost Sunrise,” which can be seen Nov. 13 on PBS, Project Welcome Home Troops expects to enroll 1,000 people in workshops in 2018, up from 277 in 2016.

“Five years ago, people rolled their eyes at us,” said Moore.

“Now I have VA hospitals chasing me down, saying we need your program. I’m going to Manhattan to meet with the Manhattan VA, among other things. We’re showing ‘Almost Sunrise’ at Lincoln Center.” 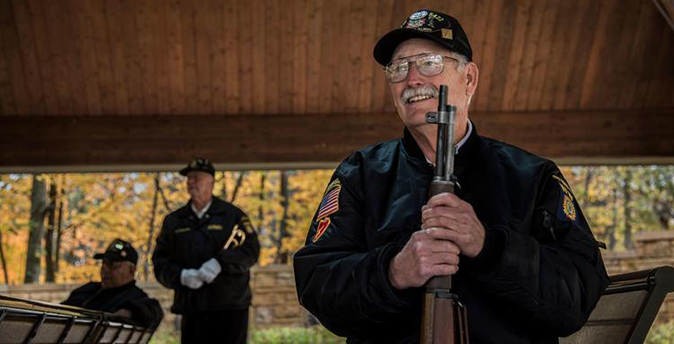 For Moffatt, who took the workshop twice and attends monthly follow-up meetings, the breathing techniques have been very effective.

Counseling, which he started before the workshop, had already helped him, he said. But before learning the Project Welcome Home Troops breathing techniques, he couldn’t walk through the woods before dawn to prepare for deer hunting. The memories of the darkened underbrush in Vietnam, with its constant threat of ambush, were just too strong.

After taking the workshop for the first time two years ago, he still struggled with feelings of panic, but he was able to make it to the hunting site.

He could drive by visual reminders of Vietnam (a particular paving material on the road, a stretch of cleared brush) without having to pull off the road and collect himself. And that day at the cemetery when he had a flashback, he was able to complete his duties at the funeral, retreat to a quiet place for 20 minutes of breathing exercises and then continue calmly with his day.

“It amazed me,” said Moffatt, a retired mechanic with a steady blue-eyed gaze, wire-framed aviator glasses and a neatly trimmed gray mustache.

“I hadn’t had that bad a flashback for years, and instead of it lasting for hours, it only lasted for 30 minutes at most, and then everything was cool.” He clapped his hands to indicate the speed of the change: “I was back up, doing ceremonies. I went back to see (if the flashback would start again), and everything was fine.”

Also a graduate of the Project Welcome Home Troops workshop, Vietnam veteran Orlander Richardson remains, at 70, an imposing figure: tall and broad-shouldered, like a paratrooper from central casting. Two months ago, he tried skydiving for the first time — and loved it. But during an interview in a bright, spacious conference room at the Levy Senior Center in Evanston, he started to freeze up; memories of his time with the Army’s elite 101st Airborne Division were causing a flashback.

Richardson paused to close his eyes and to take the raspy Victory Breaths — sometimes called Darth Vader breaths — he learned a year ago in the Project Welcome Home Troops workshop.

The Victory Breath is part of the yoga tradition, said Pam Brockman, Illinois director of Project Welcome Home Troops. The breath stimulates the vagus nerve, which is linked to emotional resiliency and control. When you stimulate it, you calm down, the rush of energy and emotion that comes with acute stress recedes and you’re able to think clearly again.

That was the case with Richardson, who emerged from less than two minutes of Victory Breaths able to laugh and joke.

“I’m a skeptic,” he said. “If somebody could have told me years ago about trying this stuff years ago, I would have said, ‘You’re out of your mind. How is breathing going to control my emotions?’”

But Richardson, a retired mail carrier from Chicago, said that since he took the workshop a year ago, his blood pressure is down, he’s sleeping much better, he hasn’t had a traumatic combat nightmare and he’s able to slow down and react more constructively to the heightened sense of threat that can make ordinary situations terrifying or infuriating.

“What do you have to lose?” he tells fellow veterans. “Everyone I know has had positive effects, so there’s something to it.” 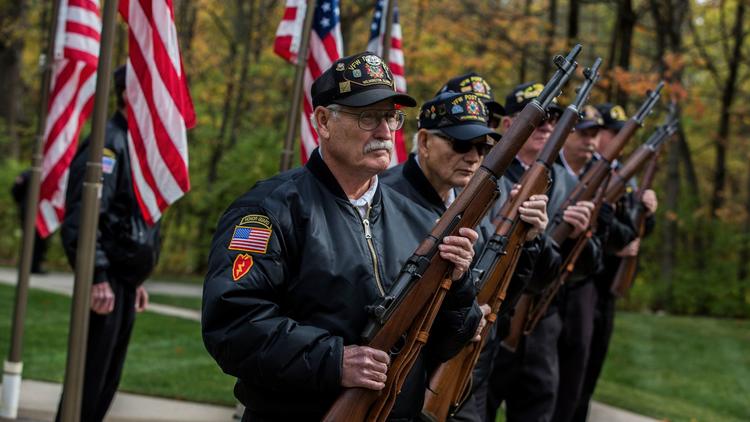 Moffatt flipped through an album of blurry black and white photos from his time in Vietnam. There was a black mountain rising like a pyramid over flat plains, a broad swath of rice paddies and a makeshift camp where a bespectacled teenager in a dusty uniform gazed, unsmiling, into the camera.

Moffatt examined the photo of his younger self: “Look at my eyes,” he said. “They look dead.”

During one battle, he said, he was knocked down with a concussion and taken for dead. A lieutenant had actually bent over him, ready to attach a “Killed in Action” tag, when Moffatt sat up.

But the worst, he said, taking a deep breath, was what happened at the 1967 Battle of Loc Ninh. He’d been assigned to a mortar crew, which, in turn, was targeted by a Viet Cong soldier. Moffatt would spot the man in the moonlight, raising his head to look around, then ducking back into the underbrush. Finally, after maybe 45 minutes, Moffatt spotted the man making his way toward him.

“He stood up, and he was just getting ready to shoot the mortar crew that was probably 25, 30 feet away,” Moffatt said.

“Well, I was quicker on the trigger than he was, and I keep on living that time and time again because it went totally against my nature (to shoot someone). I was brought up that you don’t point a gun at anything that you’re not going to shoot and eat. But it was them or him, so I just did it.”

He was awarded the Bronze Star, in part, he suspects, because of that incident. A few years ago at a military reunion, a member of the mortar crew came up to him and hugged him: “I never got to thank you for savin’ our (butt).” Still, Moffatt said, the memory haunts him.

When he returned to civilian life, he had multiple symptoms of PTSD, including hyper-viligance, in which you’re on high alert for danger. For years, there were embarrassing incidents, such as the time he instinctively ducked under the dashboard of the car his friend was driving, because the brush was pushed back from the sides of the road in a way that would have signaled the threat of snipers in Vietnam. There were sweaty, thrashing nightmares. In the course of a bad one, he said, he could push his wife, Sue, right out of bed. He didn’t even have a word for what he was going through, he said: “It was my own private hell.”

At work, co-workers knew not to surprise him by entering his workspace without warning. Once, taken by surprise while he was thinking about Vietnam, he instinctively moved to protect himself, elbowing the co-worker who had come up behind him.

Still, he did his best to suppress his feelings, and in some ways, he succeeded: “I was like a lot of guys my age,” he said. “We were working. We had families, houses, cars, jobs. Our minds were constantly busy. We were working for the weekend.”

It was when he retired and had time to think, he said, that all the terrible things that happened in Vietnam came flooding back: “I would wake up every 45 minutes or so and scan the room. I couldn’t sleep without facing a door or a window.”

After he went to the Veterans Assistance Commission in Joliet to check on his medical benefits, he was diagnosed with PTSD and offered free counseling. A counselor also suggested the Project Welcome Home Troops workshop.

His PTSD isn’t gone, he said; it never will be, but now he has effective ways to control it. He’s sleeping better. He’s so happy, he said, just to wake up in the night and be able to stare at a blank wall without immediately turning to check for intruders.

During a recent fall morning at the Abraham Lincoln National Cemetery, the maples glowed lemon yellow and cherry red. Moffatt joined in the seven-gun salute at his first funeral of the day, chatted with friends and then walked up a small hill for an interview at an open-air pavilion lined by tall grasses and fluttering flags.

This is where he’d had that flashback last spring, he said, almost casually. During an earlier interview, he was sometimes tense or hesitant to revisit a bad moment, but now he had found his stride. He wasn’t relaxed, exactly, but he was engaged and confident. He still cares deeply about his fellow soldiers, he had said earlier, and he knows many of them are struggling.

“If this helps just one veteran, then it’s worth it,” he said.