The "Light a Home" Project lights every home

Nestling at the foothills of the Aujhoda range in Purulia are three little hamlets- Rojakhuli, Baakakhuli & Niyakhuli which together form the village of Pandri. Here people live primitive lives without electricity and other basic amenities. They had to be content with single crop harvesting from six to seven bighas of land. The rest of the land goes uncultivated due to lack of water. After the paddy is harvested fields are barren & parched till the onset of the next monsoon.

Women go to the forest in search of other resources and come back with timber to be sold in the nearby market. After sunset, they cook and children study with the help of kerosene lamps. For generations, the villagers have been trapped in a vicious cycle of poverty. The one factor that could turn their lives around was electricity. This would get them power to challenge the darkness, power to bring water to their drying fields, power to increase their income.

The project ‘Light a Home’ was initiated by Sri Sri Rural Development Program (SSRDP) in the year 2012. Its aim is to take clean & affordable lighting to 1 million rural households. Subhra Ray, Director, Eastern Zone, SSRDP Trust shares, ‘In West Bengal, our targeted districts were Purulia, Vardhaman & Sunderbans. So, after our field officers did some preliminary surveys, we distributed solar lamps and provided solar grids in several places. My first acquaintance with Pandri was in the year 2013 on Republic day when we went there to distribute solar lamps. The very next year in 2014, we setup a water filtration plant there and by April 2015, we had installed a solar grid which supplied electricity to 86 homes and generated 11 kW of power.’ Thus began the first buzz of modernisation.

The concept of ‘Shramdaan’ or voluntary service on the part of the villagers was introduced to take the project to completion. It was the villagers’ proud contribution to the project. The solar grid stands as a proud testimony to the villagers’ labor of love. ‘We make leaf plates for a living. Now that we have electricity we can work in the night too. Children can study in the light of electric bulb’ shares a villager. 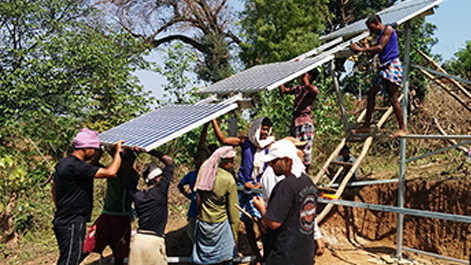 A new enclosure was built for a 5 Horse power solar pump. The pump is operated 6 hours a day. The lake water is pumped up to irrigate 50 bighas of land. The land that used to remain barren for half the year will now bear exotic crops. The villagers can take these crops to the city to tap markets hitherto unknown to them. 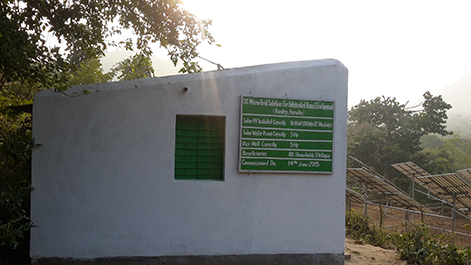 The aims of this project are manifold: 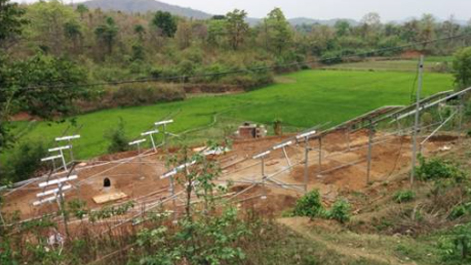 Even though the outsiders have blown the winds of change, villagers’ active participation is required to make the change permanent. The women have been taught to take care of the solar pump and rice hulling machine. Part of the income earned from these activities would be kept aside for maintenance and upkeep. The rest of the money is their income. To ensure a happy mind in a healthy body, training programs like Nav Chetana Shibir, and Swasthya Jagriti Yojna are held in the community. Through these camps, promising young men and women with leadership qualities are identified and given training in management and technical skills under the CORE program. These rural managers will keep the program running as SSRDP moves on to other villages.

‘1100 households have been identified in the vicinity and there are thousands such in the eastern zone which could benefit from such projects. Art of Living and IAHV with its rural development arm, SSRDP is especially recognised for its mobilisation programs and its presence is in about 50,000 villages all over India. My appeal to corporates is to support such projects and make the dreams of these villagers a reality.’ Says Subhra Ray.

Sunlight shines on Purulia waiting to be tapped. Water smiles in the lake eager to be pumped. The dry land pines to be drenched by water. SSRDP connects the sun, land and water. The sky smiles as the winds of change blow over Purulia.

Residents are excited about the new opportunities that have come up after the arrival of solar power. The 1.2kw-system also powers a water pump and rice huller. While the pump will allow villagers to irrigate their parched fields by drawing water from a nearby check dam, the rice huller will help them supplement income by de-chaffing rice for neighboring villages.

“I did not bother much about schooling and neither did my children because our lives essentially revolved around going to the forest to fetch firewood and timber. Though the very young go to a local primary school, they drop out. While the girls start going to the forest, the boys go to work in quarries in Bengaluru and Kerala. Now that electricity will power a motor and irrigate the fields, some of us can take up agriculture in barren plots next to the village. Electricity will also allow the children to study after sunset”, Biren Ghatwal (52), said.

“No one has passed Madhyamik from this village. I hope to break the jinx and enthuse others to follow suit. I am sure the electricity will not only light up our homes, it will illuminate and enrich our lives and help improve the standard of living”, Punia Ghatwal (15), said.