To light up for the first time

On June 13, 2017, the tribals of Biligiriranga Hills were in for a pleasant surprise. The volunteers of the Art of Living arrived at their village and started distributing solar lights to them. Located in the Chamarajanagar district, the place had never seen electricity before, and this initiative by the organization was a much-needed welcome move.

BR Hills is around 200 km away from Bangalore and is inhabited by the people of the Soliga tribe. These people have been the only dwellers in the region, and they have all along led a very basic lifestyle. It was not until June 13 that they saw their homes lit for the first time in history.

The initiative to distribute solar lights was taken under the Sri Sri Rural Development Program (SSRDP) of the Art of Living. Established in 2001, SSRDP operates with the aim to empower rural India through various initiatives. 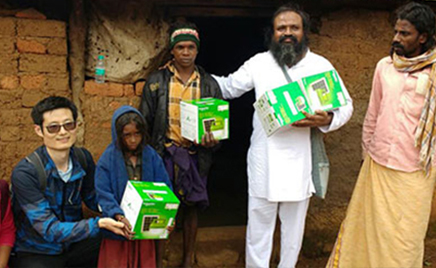 In their quest for empowerment, the SSRDP, under it’s “Light a Home” project has electrified more than nine thousand houses in the country and touched the lives of over 30,000 individuals. In continuation of their efforts, SSRDP extended their campaign to the remote villages of Biligirirangana last week.

The journey to the villages

The project was initiated by a group of 22 Taiwanese volunteers who were moved with the plight of the villagers living without electricity, and decided to do something about it.

On the D-day, the team from Taiwan that included a movie director, company secretary, and a CEO among others set off at 4 in the morning from The Art of Living International Centre in Bengaluru. The crew was soon joined by several others volunteers from Chamrajnagar including an official from the Karnataka Forest Department.

“Almost 821 households do not possess any electricity in BR ranges and we have decided to light them. This is just a small start. Over 40 million households require attention in the whole country. I request people to come forward to do their bit. With persistent efforts, we can do wonders.” said one of the volunteers who is an English teacher and an Art of Living faculty at Taiwan. 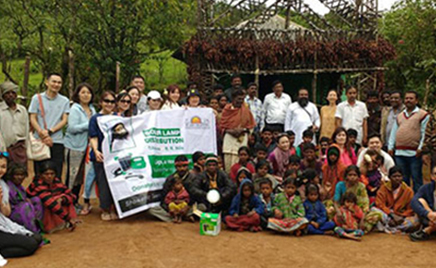 The team reached the venue post noon and started distributing the solar lamps. The lamps are equipped with a waterproof and rust-resistant battery, which lasts for 24 hrs with a re-charge time of 6 hrs.

The lamps operate in three different modes and come attached with a multi-purpose charging cable. It is made of unbreakable plastic, which makes it a good choice, given the conditions and terrain under which it shall be operated.

The team interacted with several villagers, including the Zilla Panchayat Officer who appreciated their commitment and efforts for the cause. “I am grateful to the Art of Living organization for the solar lamps. It’s a miracle for us. Thank you for so much. We are happy and satisfied now,” said the ZPO.

The team installed almost 20 solar lamps and is now looking forward to conducting some fundamental training workshops pertaining to the maintenance and repairing of the solar lamps.

“The area is very unapproachable. Though Karnataka Government has taken some great initiatives, but it still awaits implementation. We are in talks with the Panchayat and Chief to bring some villagers and train them in order to make the project more reliable and sustainable,” said the project head.

The drive concluded at around 4 pm that day. Many volunteers shared that they felt grateful to be able to contribute. Ivy Ku, one of the volunteers said that she felt truly blessed to be able to be a part of the cause and would be looking forward to contributing more in the near future. Another volunteer said, “I feel very inspired and motivated. I will go and initiate such campaigns back in our country as well”.